Habitat for Humanity is a nonprofit organization that builds houses around the world for people in need of a decent and affordable place to live. Locally, they’ve been partnering for 28 years with families seeking adequate housing in Seminole County and Greater Apopka. 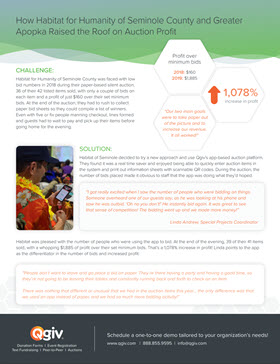 Habitat for Humanity of Seminole County was faced with low bid numbers in 2018 during their paper-based silent auction. 36 of their 42 listed items sold, with only a couple of bids on each item and a profit of just $160 over their set minimum bids. At the end of the auction, they had to rush to collect paper bid sheets so they could compile a list of winners. Even with five or fix people manning checkout, lines formed and guests had to wait to pay and pick up their items before going home for the evening.

Habitat of Seminole decided to try a new approach and use Qgiv’s app-based auction platform. They found it was a real time saver and enjoyed being able to quickly enter auction items in the system and print out information sheets with scannable QR codes. During the auction, the number of bids placed made it obvious to staff that the app was doing what they’d hoped.

The organization was pleased with the number of people who were using the app to bid. At the end of the evening, 39 of their 41 items sold, with a whopping $1,885 of profit over their set minimum bids. That’s a 1,078% increase in profit! They point to the app as the differentiator in the number of bids and increased profit.