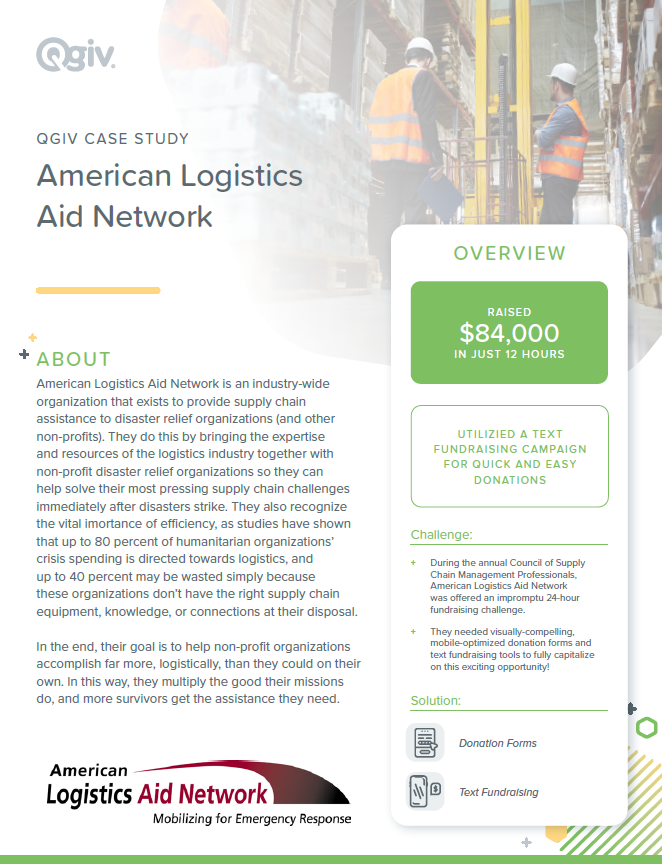 When Kathy Fulton stepped onto the stage of the 2015 Council of Supply Chain Management Professionals, she only intended to show them a brief video and to thank them for supporting the American Logistics Aid Network (ALAN), a nonprofit that handles the logistics of distributing relief supplies to disaster-stricken areas. The nonprofit was founded in 2005 at the same conference, and Fulton shared with attendees how their support had helped move and distribute millions of pounds of food, water, and other supplies over the past ten years. She could not have anticipated that her speech would lead to a whirlwind fundraising effort that raised almost $84,000 in 12 hours.

Fulton finished her speech and was followed by Dave Clark, the senior vice president of worldwide operations from Amazon and the conference’s keynote speaker. Clark challenged conference attendees to raise $25,000 for ALAN, and said that Amazon would match their contributions. He gave them 24 hours to reach that goal.

Conference-goers were enthusiastic about the challenge, and Fulton sprang immediately into action. “The speech happened at 10:00 a.m., and by 10:00 p.m. we had already exceeded our goal,” said Fulton. Amazon donated an additional $25,000 to the nonprofit during the fundraising period.

Fulton relied partially on Qgiv, a fundraising platform that lets donors give with their smartphones, to process some of the donations she collected that day. “People may not carry their checkbooks anymore, but they do carry their credit cards,” she said. She said that her partnership with Qgiv helped her process about $13,000 in that 12-hour period, including donations that people made online with their cell phones and donations that she took herself on her phone.

Fulton’s fundraiser highlights an important fact about fundraising in today’s technology-focused society. Nonprofits must be able to respond to unexpected challenges, and they need to be able to cater to donors who don’t use traditional giving methods like cash and checks. Luckily, Fulton had already prepared herself to take donations any time the opportunity arose; she had built a responsive donation page that could be accessed from any device, used a fundraising platform that let her take donations on her own phone, and had set up a text giving keyword that let donors initiate the donation process by sending a text message.

In today’s on-the-go society, donors want the ability to give quickly and easily, and they don’t often carry cash or cards. Having the right tools will let you capture your donors’ enthusiasm wherever you are, whether they’re in front of their home computer, browsing your site on their mobile phone, or changing the world at a conference.