The All Saints Catholic Newman Center is a campus ministry that complements the secular education provided at Arizona State University. We provide a home for the students and members of the university community in which they can strengthen their faith, develop their gifts, and grow into passionate, faithful Catholic leaders. 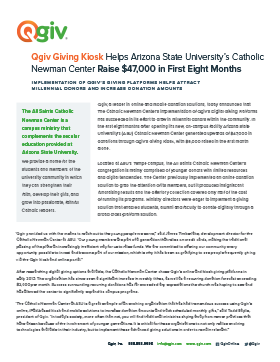 Qgiv, a leader in online and mobile donation solutions, today announced that The Catholic Newman Center’s implementation of Qgiv’s Digital Giving Platforms has succeeded in its effort to draw in millennial donors within the community. In the first eight months after opening it’s new, on-campus facility Arizona State University’s (ASU) Catholic Newman Center generated upwards of $47,000 in donations through Qgiv’s Giving Kiosk, with $8,000 raised in the first month alone.

Located at ASU’s Tempe campus, the All Saints Catholic Newman Center’s congregation is mainly comprised of younger donors with limited resources and digital tendencies. The Center previously implemented an online donation solution to grab the attention of its members, but it produced insignificant fundraising results and the offertory collection covered only half of the cost of running its programs. Ministry directors were eager to implement a giving solution that enabled students, alumni and faculty to donate digitally through a broad cross-platform solution.

“Our young members are part of a generation that relies on credit cards, making the traditional passing of the plate an increasingly inefficient way for us to raise funds.”

“Qgiv provided us with the means to reach out to the young people we serve,” said James Timberlake, development director for the Catholic Newman Center at ASU. “Our young members are part of a generation that relies on credit cards, making the traditional passing of the plate an increasingly inefficient way for us to raise funds. We are committed to offering our community every opportunity possible to invest and become part of our mission, which is why it has been so gratifying to see people frequently giving via the Qgiv kiosk and online portal.”

After researching digital giving options available, the Catholic Newman Center chose Qgiv’s online and kiosk giving platforms in early 2013. The organization has since seen a significant increase in weekly tithes, as well as a recurring donation forecast exceeding $2,000 per month. Success surrounding recurring donations has far exceeded any expectations the church was hoping to see and has allowed the center to significantly expand its campus programs.

“The Catholic Newman Center at ASU is a great example of an evolving organization that has had tremendous success using Qgiv’s online, iPad-based kiosk and mobile solutions to increase donation amounts and track scheduled monthly gifts,” said Todd Baylis, president of Qgiv. “In today’s society, more often than not, you will find traditional ministries shying away from newer practices that have arisen because of the involvement of younger generations. It is critical for these organizations to not only realize evolving technologies available in their industry, but to implement these advanced giving solutions in order to remain relevant.”