Catholic Charities of the Archdiocese of Denver has been serving Northern Colorado since 1927. They serve thousands of people each year in three interlocking areas: Women’s Services, Family and Child Care Services, and Housing and Shelter Services. 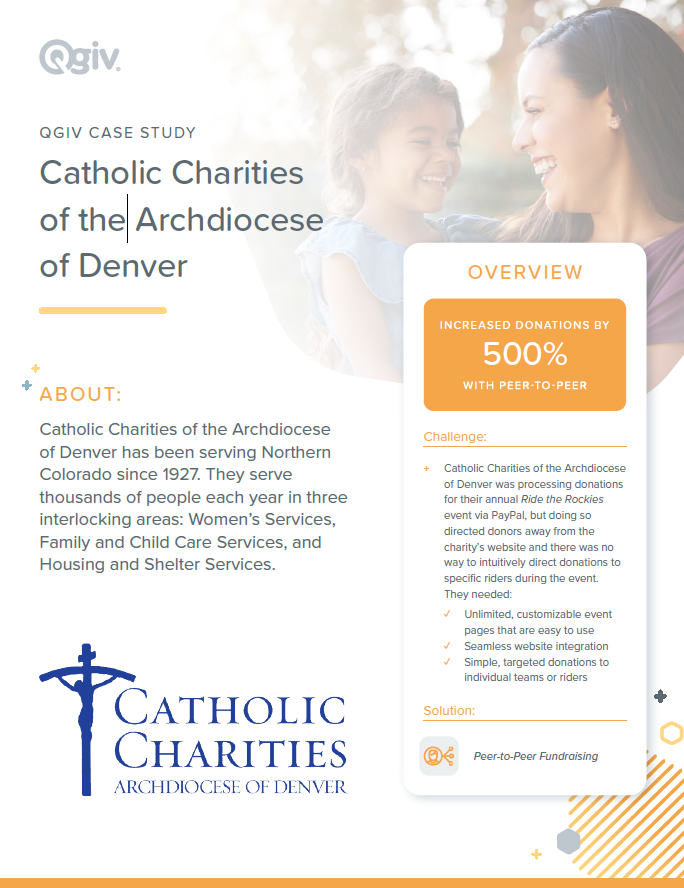 Every year, the Catholic Charities Archdiocese of Denver manages one of their biggest fundraisers. A small group of dedicated cyclists participate in Ride the Rockies, a week-long cycling trip covering hundreds of miles in Colorado’s Rocky Mountains, to raise money for Samaritan House, one of the Charities’ homeless shelters. The Catholic Charities’ Team Samaritan House has participated in the event for the last 5 years, and has raised money that’s critical to the shelter’s mission to feed and house the homeless.

When the agency started raising money through the Ride the Rockies event, they set up their fundraising system through PayPal. The basic features made raising money for the riders a challenge. “It wasn’t very cohesive,” said Marketing Coordinator Vanessa Chavez. She explained that the fundraising platform didn’t integrate with the Charities’ website, so they had to direct potential donors away from their site to a different one. Donors would then make a donation to the general event; if they wanted to support a specific rider, they could clarify their choice only by leaving a memo during the donation process. Despite those obstacles, the Team Samaritan House and Catholic Charities Archdiocese of Denver raised just shy of $20,000 in 2013.

In 2014, the agency switched their online fundraising to Qgiv, a company specializing in seamless, user-friendly donation forms. The same year, they decided to use Qgiv’s social fundraising platform, to run their Ride the Rockies fundraiser. They noticed an immediate difference.

The first big difference the agency noticed was that Qgiv’s Peer-to-Peer Fundraising system could be implemented and linked to the Catholic Charities Archdiocese of Denver’s website. “Having the ability to run the event on our site and directing everyone to our website was a huge help for us,” commented Chavez. Riders were also able to build their own personal fundraising pages, complete with their own pictures, stories, and appeals for support. Donors no longer had to donate to a generic page and write in a memo to credit one particular rider; they could visit the rider’s own donation page and give directly to them.

Using Qgiv’s Peer-to-Peer Fundraising system had a huge impact on the agency, both on its resource development department and the homeless shelter they supported. “The system was very easy,” said Chavez — and it was profitable, too. In 2014, the agency’s first year on the Qgiv Peer-to-Peer Fundraising system, Team Samaritan House raised over $40,000 — an increase of over 100% in just one year.

In the space of three years, the Catholic Charities Archdiocese of Denver accomplished a 500% increase in donations made to their Ride the Rockies fundraiser.

The 2014 event’s success with the Qgiv Peer-to-Peer Fundraising system excited the resource development team and the riders alike. With one Peer-to-Peer fundraiser under their belt, the fundraisers at Catholic Charities Archdiocese of Denver set their sights even higher. They set out to raise $115,000 during the 2015 Ride the Rockies — and they succeeded. “We’re very fortunate to have great supporters riding for us,” said Chavez. “This year was a complete success because of our wonderful riders and an efficient online system.”

In the space of three years, the Catholic Charities Archdiocese of Denver accomplished a 500% increase in donations made to their Ride the Rockies fundraiser, aided by the creativity of their resource development department and their use of the Qgiv Peer-to-Peer Fundraising platform. Chavez anticipates that her department will continue to experiment with new fundraising limits, new cycling distances, and new strategies. But one thing won’t change — the agency will continue to use Qgiv’s Peer-to-Peer Fundraising system for their social fundraising. “We’re really trying to reach out and try new things,” said Chavez. “And sometimes new things work, and sometimes they don’t. Qgiv’s Peer-to-Peer Fundraising system worked.”

Produced in cooperation with