Established in 1979, the Merit School of Music was founded by Alice S. Pfaelzer and Emma Endres-Kountz to fill the gap caused by the Chicago Public School system’s elimination of music education from the elementary school curriculum. 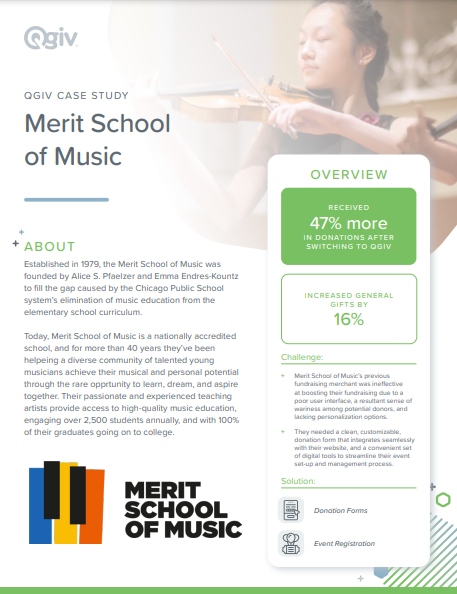 Recognizing the importance of music instruction to a well-rounded youth education, the two founders knew the School would provide a much needed and highly desired program. During its first two years, the, at the time exclusive, School held auditions to fill the 162 openings available at the tuition-free Conservatory. After that, with its popularity continuing to grow, Merit School of Music moved to a larger space in Chicago’s Fine Arts Building and launched its private lessons program. Since then it has moved to multiple locations throughout the city in order to accommodate its consistently growing student body.

Now surpassing 6,000 students, the nonprofit community music school offers a unique service to Chicago’s youth— the ability to learn and play music regardless of ability to pay. Currently located in the Joy Faith Knapp Music Center in Chicago’s West Loop, the School tutors students from more than 150 Chicago-area zip codes. Merit School of Music has maintained the funding to provide services such as early childhood classes, instrumental music instruction and private lessons for 34 years. Additionally, the school brings music education back into public district classrooms through contracts with some of the individual schools. Merit School of Music also includes the Alice S. Pfaelzer tuition-free Conservatory, where students can audition to be a part of a group of the most advanced and motivated young musicians in the nation. The School prides itself on the successfulness of the Conservatory, which has 99% of its students go into music-related higher education studies.

Digital giving was not a new idea for the Merit School of Music. For a few years it had worked with Network for Good, an online donation platform, to assist in the fundraising process. However, over time the School realized this giving platform was not meeting the needs of its community and donors.

“Network for Good was not effective in boosting our overall fundraising,” according to Jennifer Ridder, individual gift manager, Merit School of Music. “When donors made online donations, their credit card statements would have unrecognizable transactions, causing confusion and wariness. Additionally, the Company required a one week turnaround time to update and customize the donation page, which was unacceptable when updates needed to be made quickly surrounding our events and announcements.”

In 2012, Merit School of Music decided to redesign its website. Its leadership used the redesign as an opportunity to research new donation platforms that would offer streamlined service, ease of use and transparency for donors. Specifically, the School was looking for a provider that offered customization services, could support event ticket sales and offered private, branded pages for donations. After doing thorough research conducting demos of different donation platforms, Merit School of Music decided on Qgiv and its Contextual Giving solutions as the only platform able to provide every item on its wish list.

“After conducting our own research and reaching out to other nonprofits to get their feedback on donation platforms, we decided that Qgiv fulfilled all of our donation and event registration needs,” said Ridder. “Qgiv offers simplicity for both our donors, allowing them to use our branded page for donations and registration, and for our internal team, who can now easily make adjustments and customize our site.”

Since its provider switch in the beginning of 2013, Merit School of Music has seen an increase in both the number of gifts and the amount of donations it has received. Donors who used to mail in a check for $20,000 donations were now logging on through their smartphone, finding the new platform easy and secure to use. With half of its current budget coming from community contributions, and almost all of its major donors embracing online giving, the simple and effective platform is key to the School’s continued prosperity.

“Our implementation of Qgiv’s platform was seamless, and we began to see the results immediately,” said Ridder. “It gave our whole donation system a cleaner look, and our regular donors have told us how much they love it.” Merit School of Music implemented both the Qgiv Online Donation Platform to offer a more simplified and trustworthy portal for fundraising. The School found that Qgiv offered a streamlined and easy-to-use donation platform, and have seen regular donors transition to online giving since it was launched. Qgiv’s Online Donation Platform allows the School to seamlessly accept donations 24/7 through a branded web page that matches their website format, and also allows donors to set up recurring donations.

Less than a year since implementing Qgiv, Merit School of Music has seen an increased amount of online donations as well as a significant increase in traffic to its donation page:

The School has seen a 16 percent increase in general gifts in its first year since switching from Network for Good in the beginning of 2013.

Additionally, the school has received approximately 47 percent more in donations over its 2012 fundraising.

Merit School of Music currently receives 35 percent of its budget through online giving, a number that they expect to rise as younger generations and alumni increasingly join its donor base.

With a student body of 6,000 students across all of its numerous programs, Merit School of Music has shown no sign of slowing its momentum anytime soon, making consistent fundraising critical to continued growth. Merit School of Music recognizes the importance of online offerings in its growth. The School’s goal over the next few years is to increase recurring donations— a feature included in Qgiv’s solutions. As the School continues to push towards its goal of increasing its alumni base, it can evolve its giving options by implementing Qgiv’s mobile and giving kiosk platforms.